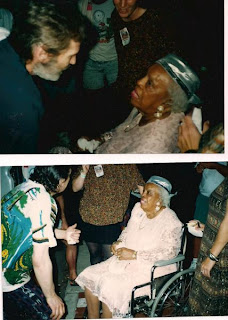 Levon Helm & Rick Danko meeting w/ the legendary "Diamond Teeth Mary", the inspiration behind THE BAND lyrics "Miss Brer Foxhole who's got diamonds in her teeth" from the song "W.S. Walcott Medicine Show".
Levon's description of her:

"Our...favorite act was 'The Lady with the Million Dollar Smile,' F. S. Walcott's big featured singer, who'd come on in the third quarter of the show. She was an armful. She wore bright dresses and had all her teeth filled with diamonds! She sang on all those real get-down songs like 'Shake a Hand'."

Thanks to Butch Dener for the pic.
Posted by Plochmann at 9:41 AM No comments: 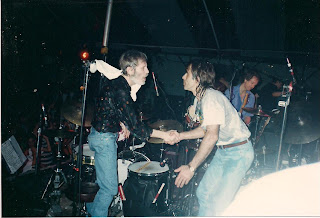 Thanks to '90's The Band road / tour manager Butch Dener for this classic shot of respectful brothers.
Posted by Plochmann at 7:29 AM No comments: 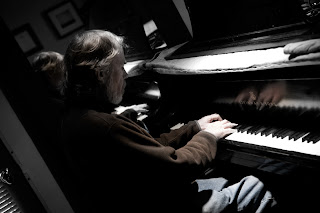 Thanks to Butchie Dener for this link!
Posted by Plochmann at 9:34 AM No comments: 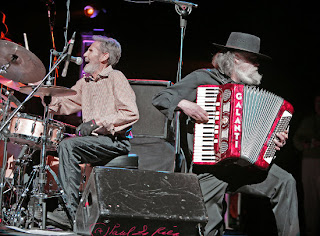 Thanks to Adam Betley for updating his Garth Hudson article w/ Garth's memories from his last Ramble w/ Levon Helm:


"I recall my last Ramble with Levon. I accepted an invitation to guest with Jimmy Vivino who had put together a nice tribut...e to the voices Rick and Richard. My wife said she believes he hears them singing in his head and heart. Jimmy is very good on piano and vocals. He, Byron Isaacs, and Tony Leone were doing unusual Band songs that they don't do with the rest of the group. I played Jimmy's set before Levon and his band came on for one of his last Rambles (January 21). That's where I last saw Levon in action and he looked fine. I remember Howard Johnson coming up to him in the back room, in the kitchen. Howard said 'You were strong tonight'. And then Levon said 'Ohhhh thank you!' I sat at the round oak table for the last time and listened to one of the greatest story tellers I have heard.

I hope Levon's barn will survive for the legacies. It will take well-known artists to continue performing at the barn in the spirit of Levon to actually save the barn and turn it into a national music treasure. It is a fantastic cathedral-ceilinged, wood-pegged recording studio big enough for an orchestra.

I miss Richard, Rick, and Levon. They walk these hills."
Posted by Plochmann at 7:57 AM No comments: 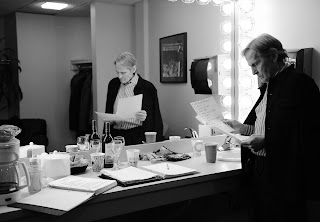 Posted by Plochmann at 7:52 AM No comments: