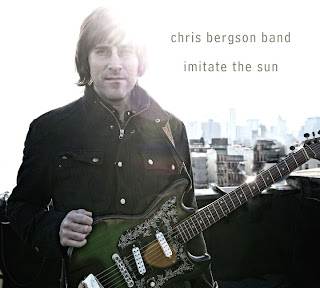 We love that each & every time NYC-city based Chris Bergson, w/ his all-star cast of musicians, including Bruce Katz (Gregg Allman Band), Jay Collins (Levon Helm's son-in-law, Gregg Allman Band), Tony Leone (Ollabelle) & Matt Clohesy, puts out a new album it is a believable product. While listening song after song, we find it so easy to develop scenes in our minds of after-hours urban alleyways, bars & street characters.

Chris' latest release, Imitate The Sun (2 Shirts Records), is no exception to the matter & is a wonderful follow-up album to his '07 Fall Changes album. Imitate The Sun contains six original songs & four songs paying tribute to some of his musical heroes, including Bob Dylan & Howlin' Wolf.

Chris & band mates have once again provided a polished product that is timeless, supported by honest vocals & instrumentation. This album is a must-have for the rock & blues enthusiast. Checkout MOJO's album comments:

The urban blues stories of a streetwise gumshoe.

The ambiance of Chris Bergson's music is an Edward Hopper world of suspicion and solitude, dusk-time avenues and dimly lit bars, its soundtrack a terse dialogue of guitar and saxophone. This is the terrain of Tom Waits and Lou Reed, and Bergson has something of each in his gruff, laconic delivery, but his sound is intransigently his own. Admirers of Fall Changes (it was MOJO Blues Album of the Year for 2008), hearing Goin' Home, Shattered Avenue, Mr. Jackson and the title track, will swiftly fall into step again. But while Bergson is arrestingly himself in his own songs, he can be handcuffed by other people's: Dust My Broom is just a competent genre performance, and Dylan's Standing in the Doorway, though ardently sung, is in thrall to its original arrangement. But about two thirds of the album is riveting.

Track List
Goin' Home
Imitate The Sun
Shattered Avenue
Hello Bertha
Down In The Bottom
Laying It Down In White
You've Been A Good Old Wagon
Mr. Jackson
Dust My Broom
Standing In The Doorway